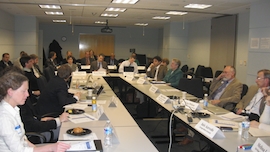 Participants at the Working Meeting

In his plenary address, Bryan Mignone from the US Department of Energy's Office of Policy and International Affairs gave an introduction to the office and its perspective on energy modeling as a policy analysis tool. Following these remark, the director of EIA's Office of Electricity, Coal, Nuclear, and Renewable Analysis, J. Alan Beamon, and the team leader of EIA's Building Energy Consumption and Efficiency Analysis, Erin Boedecker, provided an overview of NEMS as a policy analysis tool. Lastly, energy and resource economist Skip Laitner spoke about adapting models to better fit reality.

Three presentations were given by Georgia Tech students on topics that were the focus of detailed break-out groups.

Topic 1 – Modeling Demand-Side Management for Peak Load in NEMS: This topic explored the ways in which demand-side management (DSM) programs, such as energy efficiency and demand response, can be modeled in NEMS. The topic presentation and discussion focused on DSM programs targeted toward peak load, with special emphasis on how NEMS constructs hourly load and how loads are translated between the demand modules and the electricity market module in NEMS. The discussion concluded with suggestions for advancing the capacity of NEMS in modeling DSM programs targeted toward peak load.

Topic 2 – Technology Learning in NEMS – “Learning effects” refer to the relationship between the cumulative production of a technology and its cost and performance. NEMS has the capacity to model learning effects for various technologies through the use of endogenous and exogenous learning curves. For distributed solar photovoltaics, future technology costs are endogenously derived by a logistic function that is controlled by the first-of-a-kind price of solar PV and a learning factor, indicating the percentage price reduction for each doubling of solar PV installation. For most other end-use technologies, learning effects are introduced exogenously into the efficiency and cost assumptions of the trajectory of technologies that are assumed to be available over time. This session focused on ways of advancing the capacity of NEMS to incorporate learning effects.

Topic 3 – Climate-Driven Demand Changes in NEMS: Climate change could create many challenges for the American energy system, including changes in energy demand, resource availability, transmission and distribution efficiency, and a host of issues related to the energy/water nexus. NEMS could provide more informative projections if some of the expected impacts from climate change were included in the modeling effort. One particular area where NEMS could be easily adjusted to include climate change impacts is the projection of heating and cooling degree days. NEMS modeling of behavioral responses to such changes was also discussed in this session. Following the workshop, the Georgia Tech team prepared an annotated bibliography of approximately 120 publications on "Global Warming and Building Energy Consumption."

An annotated bibliography of NEMS policy analysis publications was prepared by Jeff Hubbs, a Public Policy Masters student at Georgia Tech. A summary report on the  workshop was prepared by Energetics Incorporated.