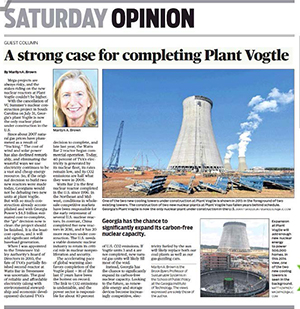 Mega projects are always risky, and the stakes riding on the new nuclear reactors at Plant Vogtle couldn’t be higher.

With the cancellation of VC Summer’s nuclear construction project in South Carolina on July 31, Georgia’s plant Vogtle is now the only nuclear plant under construction in the U.S.

Since about 2007 natural gas prices have plummeted as a result of “fracking.” The cost of wind and solar power has also declined remarkably, and eliminating the wasteful ways we use electricity continues to be a vast and cheap energy resource. So, if the original decision to build two new reactors were made today, Georgians would not be debating two new units at plant Vogtle. But with so much construction already accomplished and with Georgia Power’s $4.5 billion estimated cost-to-complete, the “go” decision now is clear…the project should be finished. It is the least-cost option, and it will add significant reliable baseload generation.

When I was appointed to the Tennessee Valley Authority’s Board of Directors in 2010, the fate of TVA’s partially-finished second reactor at Watts Bar in Tennessee was uncertain. The goal of reliable and affordable electricity (along with environmental stewardship and economic development) dictated TVA’s decision to complete, and late last year, the Watts Bar 2 reactor began commercial operation. Today, 40% of TVA’s electricity is generated by its nuclear fleet, its rates remain low, and its CO2 emissions are half what they were in 2005.

Watts Bar 2 is the first nuclear reactor completed in the U.S. since 1996. In the Northeast and Midwest, conditions in wholesale competitive markets have been responsible for the early retirement of several U.S. nuclear reactors. In contrast, China completed five new reactors in 2016, and it has 20 more reactors under construction. The U.S. needs a viable domestic nuclear industry to retain its critical role in nuclear nonproliferation and security.

The accelerating pace of global warming also favors completion of the Vogtle plant—16 of the last 17 years have been the hottest on record. The link to CO2 emissions is undeniable, and the power sector is responsible for about 40% of U.S. CO2 emissions. If Vogtle units 3 and 4 are not completed, new natural gas units will likely fill most of the void. Instead, Georgia has the chance to significantly expand its carbon-free nuclear capacity. Looking to the future, as renewable energy and storage devices become increasingly competitive, electricity fueled by the sun will likely replace both our coal plants as well as our gas guzzling cars.

The views expressed above are solely those of the author and not, necessarily, of Georgia Tech or TVA.