Gender and Other Social Demographics: Can They Explain Attitudes Towards Energy Security?

Working with colleagues at Georgia Tech and the Vermont Law School and with support from a MacArthur Foundation grant, I had the opportunity to help design and evaluate a survey about energy security that was completed by more than 2,000 individuals from 10 countries. The survey measured individuals’ concerns regarding specific dimensions of energy security, including resource availability, energy affordability, climate, and equity.  Our results identified perspectives on energy security that aligned strikingly with several socio-demographic attributes.

Specifically, we found that women and individuals with lower levels of education and income express greater concern for virtually all facets of energy security, and found them more important than male respondents. This is not surprising because these same individuals (women, low-income individuals, and the less educated) tend to be more vulnerable to high energy costs and political disenfranchisement. Our take away is that socio-demographics can be useful in identifying groups with similar vulnerabilities and common types of energy security concerns that extend beyond national boundaries.

There is no one size fits all analysis for energy security perceptions because vulnerability varies across countries, communities and individuals.  Research suggests vulnerability is strongly impacted by social demography, and within social demographics, gender seems to play an important role. In addition to differences in beliefs about energy and climate issues, US men exhibit different energy policy priorities. A recent opinion poll in the U.S [1] found that a secure energy supply is a top priority for almost all men. Alternatively for women the environment and climate are of highest importance. This corroborates our findings and other literature (in the US and other countries) that found females are more likely to be “climate concerned.” [2]

The impact of gender is not universal and must take into account differences in age and education, as well as the energy resource portfolios and policies of the countries in which individuals reside. Lacking any finite consensus, we must contextualize debates on energy security and climate change, as C3E has begun through its annual symposium and social network, C3Enet.org. Taken together, studies and polls suggest that gender plays a considerable role in shaping perceptions of climate change and energy security. As such, the Clean Energy Ministerial provides an important forum that gives perspective into the views and priorities for energy security in major economies around the globe. 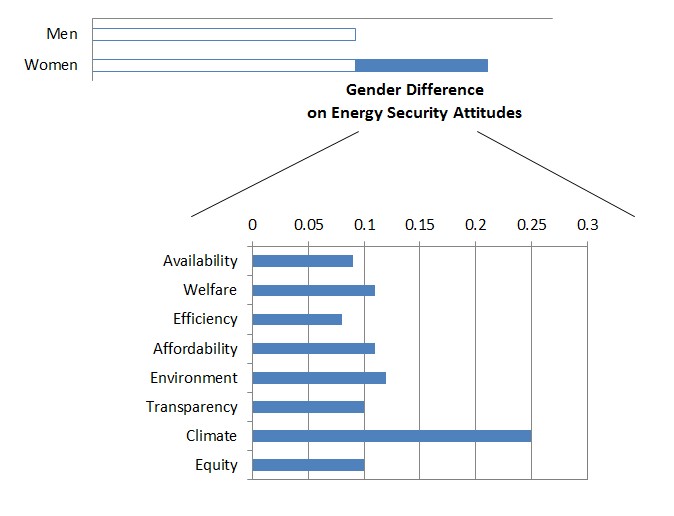